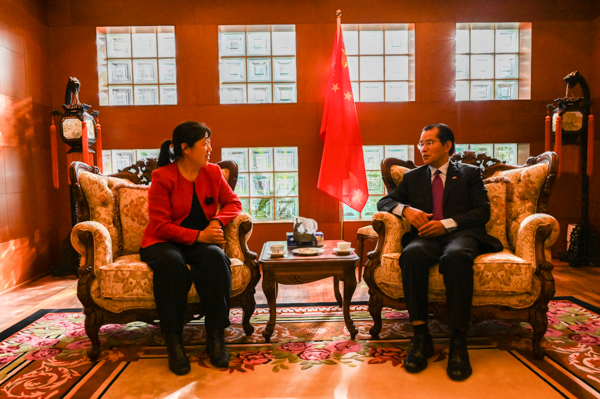 Stockholm, March 17(Chineseonline) — 2020 marked a special year for China to win at least two major wars with one against Covid-19 and the other absolute poverty eradication. The latter was a long term war which was fought for many years and the former was a sudden battle which attacked Wuhan, Hubei Province within a very short time. No matter what, China won both as a result. How could China achieve these achievements? What are the challenges and opportunities ahead of China? What’s his prospect about Sino-Swedish relations? With these questions, Chinaeurope.eu reporter got a written interview with his excellency Ambassador Gui Congyou in Stockholm recently.

ChinaEurope.eu : What measures China had taken to control the Covid-19 through 3 months? Are you not afraid of the economic losses?

Ambassador Gui: Covid-19 spreading is an important public health incident which spread the fastest, the broadest and the most difficult to prevent since the founding of the People’s Republic of China. Under the leadership of the Communist Party of China’s Central Committee taking Xi Jinping as the core, China took the most comprehensive, strict and thorough measures to prevent the spreading of the virus. 1.4 billion people joined in hands and took well coordinated steps to make unremitting joint efforts with a high price and even sacrifices in order to stop the infection. With the joint efforts by the people all over the country, China finally put a full stop of the infection (by April 8, 2020 when Wuhan reopened). China immediately pushed forward resumption of production and restoration of normal life, social order and economic growth.

As early as January 20, 2020, Party Secretary Xi Jinping had given the important order in dealing with the virus spreading. He stressed that we must put people’s life and health on priority. During the campaign against the virus, China has always insisted on the principle to prioritise people’s life and health, swiftly and effectively mobilised the whole nation’s resource and man power, equally treated every patient and tried to save every life at all costs. By doing so China has protected people’s rights of life and health.

As for detailed measures, you can see the following link published by China’s State Council.

ChinaEurope.se: Isn’t it a loss of freedom to close down? How did the Chinese government and people see the idea of losing short term freedom to fight against the virus and gain the long term freedom in life and business?

Ambassador Gui: It is very important to discuss the real meaning of freedom against the background of the spreading of Covid- 19. At the beginning, some western media even criticised China’s closedown and thought it was against freedom to quarantine at home or restrict travel. I like to talk about the concept of freedom. In my understanding, that western people talk about freedom refers to the right of freedom, a right of individual’s freedom. In China, when people enjoy freedom, they also have responsibility and obligation. Over-emphasis of individual’s freedom can lead to extreme and narrow-minded egoism. It can even lead to the trend of opposing science. If people only think of individual freedom but neglect virus spreading or forget the responsibility of protecting oneself and others from being infected, it will affect the implementation of the Covid-19 prevention measures and harm the people’s rights for life and health. Perhaps this is why in some countries the infected number haven’t decreased and the death number is still increasing even though they also took preventive measures.

More importantly, the most effective way to stop Covid-19 from spreading is to avoid direct contact, keep social distance. This has been proved to be scientific and effective. To stay at home, not gather together, avoid unnecessary travel are suggestions from the World Health Organisation. Right now every country including Sweden are taking such measures. We welcome all these measures to prevent virus from spreading. Swedish government recently announced that if necessary, closedown can be a choice if a third wave of virus comes. This can be a good illustration of seeking freedom with scientific way.

ChinaEurope.eu: In absolute poverty eradication, what measures have China taken to get rid of poverty for those who live in the remote and almost uninhabitable areas?

Ambassador Gui: On February 25, 2021, Chinese President Xi Jinping formally announced that with the joint efforts of the party and the people of all ethnic groups all over the country, China has won a victory in battling the absolut poverty eradication. With the current standard, nearly 99 million villagers got rid of poverty in 128 thousand villages in 832 counties. This indicates the completion of the task of eradicating absolute poverty in China.

To get rid of poverty and improve livelihood is an important mission for the communist party of China. Since 2012， Party Secretary Xi Jinping has made a great deployment and taken a series of innovative and original measures to eradicate absolute poverty. The measures included documentation, appointing village head and party members to help poor families and mobilise private sectors and NGOs to jointly fight against poverty which involved the largest number of people in human history.

The Chinese standard of poverty line is to have enough to eat and wear with the guarantee of compulsory education, basic medical care and housing. Efter 8 years of concerted efforts, people’s income has increased from 2982 yuan (about 500 US dollar) in 2015 to 10740 yuan (About 1800 dollar) in 2020 annually. This is disposable income exclusive housing.

The party under the leadership of Secretary Xi Jinping has played a fundamental role during this process for example in the village it was imperative for the party member to help the poor family.

During the struggle against poverty, China has also created a kind of spirit that is characterised by coordinated action and unswerving determination, being accurate and down-to-earth, innovative and living up to the people’s expectation. China finished this task just at the end of the 100 years of the founding of the Communist Party of China. It also marks a new start for China to continue to improve people’s living standards.

ChinaEurope.eu: What challenges and opportunities China is facing now in the new situation?

The current Covid-19 virus has accelerated the changes in the world. World economy is in recession. Both home and abroad, there will be great changes. The unbalanced and insufficient development will be a key issue, Other challenges include innovation, agriculture, gap between rural and urban areas, ecological environment, social security and governance. There are weak points in all these areas.

However, the changes also mean opportunities. Chances also hide in risks. China’s development is still on a stage which is full of opportunities. China has its own advantages in system, governing efficiency, better economic foundation and abundance human resources. China still has great market potential and a stable society which are beneficial for development. I believe that China will surely be able to turn the risks and challenges into opportunities and achieve new achievements in the new development period.

ChinaEurope.eu: What is your prospect about Sino-Swedish relations? Briefly.

Ambassador Gui: China and Sweden have close exchanges in sci-tech, economic and trade, education and culture and wide cooperation in bioscience, new energy, smart city and sustainable development. China and Sweden have kept good communication in multilateral cooperation and advocate multilateral cooperation and free trade. Both are against protectionism, in favor of economic globalisation and multilateral trade system. Both are devoted to jointly dealing with global challenges including climate change, pushing forward regional hotspot conflict to be solved through peaceful means and contributing to world peace, stability and development.

Due to historic, cultural and system’s differences, it is normal that China and Sweden have different views in some issues. The two sides can discuss how to control the differences, focus on common consensus and expand friendly exchange and cooperation through communication and dialogue. It is hoped that both sides will continue to cooperate and exchange on the bases of mutual respect, equality and non-interference in each other’s internal affairs and make joint efforts to push forward bilateral friendly cooperative relations towards healthy and stable development.