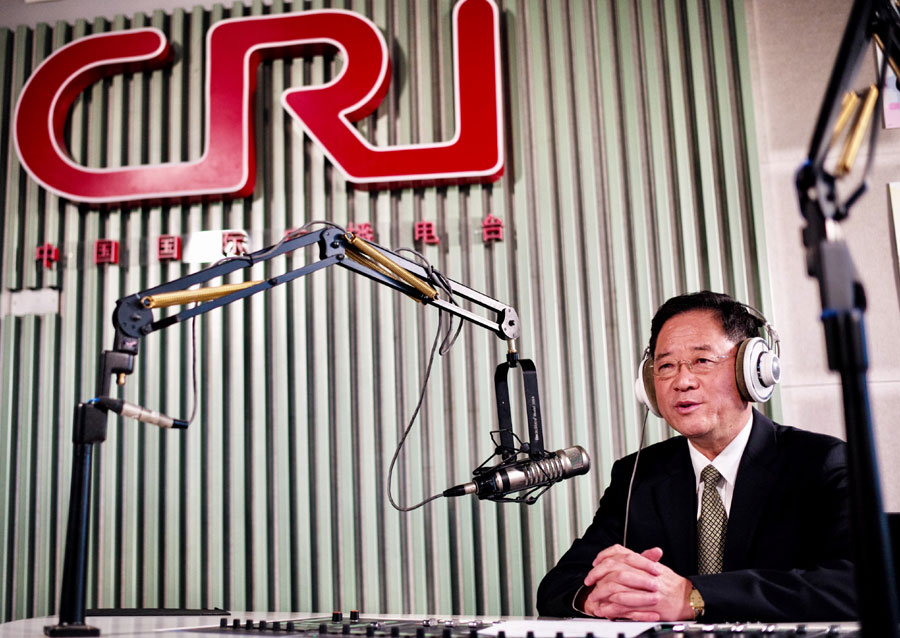 STOCKHOLM, Jan. 1(Chineseonline)–CRI Director-General Wang Gengnian has delivered a speech to CRI’s listeners all over the world on 2017 New Year .

China Radio International (CRI) Director-General Wang Gengnian delivers a speech on behalf of all faculty members of CRI to express his best wishes to overseas audiences across the world. [Photo: CRIENGLISH.com]

As the New Year approaches, the Director General of China Radio International (CRI), Wang Gengnian, sends a message on behalf of all departments of CRI, expressing his cordial greetings and best wishes to overseas audiences, via radio and the internet.

In this year’s speech, Wang reflects on 75 years of broadcasting, and how CRI sees the new year as an opportunity to embrace a fresh start.

He notes that CRI will always endeavor to enhance its ability to disseminate information to help its friends learn more about China, gain a deeper understanding of the country and become fonder of the nation and its people.

This is Director-General Wang’s speech in full:

As we ring out the old year, and bring in the new, on behalf of China Radio International and the China International Broadcasting Network, and in my own name, I express my cordial greetings and my New Year’s wishes to all of you. May everything go well, and may you have peace and happiness!

Not long ago, CRI celebrated its 75th birthday, and we received a great deal of congratulations from our listeners and netizens across the world. One netizen in particular, called S. M. Ravichandran from India, posted on social media: “From shortwave broadcasting to the internet, and then to social media and mobile apps, China Radio International has accompanied me through the whole journey. I wish you all the best, and Happy Birthday!”

It was a brief message, but this friend’s wishes voiced the aspirations of countless people, and summarized CRI’s passion for keeping up with the times.

Dear friends, your encouragement and attention pushes us forward, and keeps us progressing. The tremendous support of audiences across the world makes us grow stronger. I hereby wish to express my sincere gratitude to you all.

The world reached a critical crossroads in 2016, with China playing its own significant role in it. The G20 Hangzhou summit was an opportunity for China to contribute its wisdom in global governance to the world; the Belt and Road Initiative is fast forming a growing circle of friends; China shines as a responsible great power under the spotlight of the international arena.

China’s swift development, impacts on the whole world, and China’s “where are we now, and where do we need to get to?” approach has inevitably attracted the world’s attention. CRI aims to strengthen the bond between China and other countries around the globe and help people gain a greater understanding of China. Over the past year, CRI has sought to deepen media convergence and transformation; speed up its pace of cooperation with overseas media outlets; and tell a multitude of wonderful Chinese stories.

CRI has signed contracts with media agencies from Russia, Serbia and Bangladesh, which were witnessed by the Chinese President Xi Jinping and the leaders of the three countries.

We had so many amazing stories to tell – Our reports on the G20 Hangzhou summit were warmly received; the missions of the Tiangong-2 space lab and Shenzhou 11 manned spaceflight have received extensive coverage and wholehearted praise from our friends. We have striven to connect China with the rest of the world, through three globally oriented multilingual new media brands – China News, China Radio, and China TV.

We launched various mobile platforms in several languages such as “Chinese-English” “Sino-Russian” “Chinese-Italian” “Chinese–Japanese” “Chinese-Spanish” and “Chinese-Indian”. CRI’s new media programmes such as the upgraded “Makers Initiative” and “the Danube Project” have drawn interest and support from many different countries.

We have also been actively reaching out to the world – jointly launching a reporting mission under the theme of the Silk Road with Russia; co-organized the “Media Leaders Roundtable of the Bo’ao Forum for Asia”; “the ASEAN-China Friendship Singing Festival”; and “From University to the World — A Dialogue between Chinese and American University Students”, which received a huge amount of attention.

They say, you reap what you sow. CRI has achieved much in 2016. 55.3 million people have interacted with us, and the number of our fan clubs has reached 4115. We now have an audience of 260 million, with 80 million fans for our social media platforms. But far from being simply a statistic, we count you all as our dear friends.

A message from Bulgarian Netizen Valentina Nikolova was particularly inspiring. On our social media platform, she said CRI “gives wings to your dreams. She makes you feel how fabulous China is, and deeply understands the power of friendship, thank you my Chinese friends!”

These words are like heartfelt encouragement from an old friend, which spurs us on to stay true to the mission, be diligent and courageous, and pursue our dreams and most importantly, keep moving forward.

2017 sees the start of the Chinese Lunar Year of the Rooster. Golden pheasants announce the arrival of the dawn, while we embrace a new day, we kick off the day’s work. For 75-year-old CRI, a new year means a fresh start. We will always endeavor to enhance the ways we communicate with you, our friends, to help you learn more about China, develop a deeper understanding of this wonderful nation, and to become even fonder of our country.

Once again, please accept my heartfelt New Year wishes, and thank you!