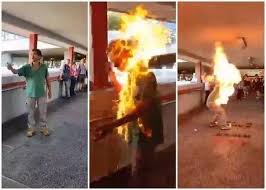 Stockholm, Dec. 30(Chineseonline.se) — From June 9th one million people demonstration to the end of November 2019, Hong Kong experienced some serious violent events. The demonstration started with the discussion of the extradition of criminal suspects from Hong Kong to Taiwan or Chinese mainland. It later developed into violent conflict between demonstrators and the police when some young people threw petrol bombs to the police and ordinary people. When the situation was most serious, the US passed a bill about Hong Kong’s “Democracy” and threatened to give sanctions to Hong Kong business people or officials.

The conflict escalated due to the support and instigation from the US and and many interest groups in Hong Kong. Some young people thought they were brave to make and throw petrol bombs to the police and the ordinary people even though they knew or were not aware that was a violation of law. The fire caused a lot of people to have been injured and suffer from the burning pain. No matter what kind of excuse, the violation of law is doomed to be judged and punished by the law. The following are some photos to show you the situation.

(Mind you, these photos are not suitable for children.)

At the very beginning the demonstration was peaceful. But gradually the action of sabotaging public properties or legislative authority office and bank’s ATM building by some youngsters became rampant.

According to reports, many students used chemicals to make detrimental weapons and they exercised how to throw petrol bombs in the swimmingpool. They threw the bombs to the place wherever the police was around and caused a lot of fires.

The police accused the rioters of using detrimental weapons including petrol bombs, bows and steel balls as well as bricks to attack the police defence line. A police media liaison officer was shot in the small leg by the arrow. A riot police was hit by the steel ball.

Upon midnight on Nov. 17th, Hong Kong police issued an ultimatum through facebook that the demonstrators should not use petrol bombs, arrows, cars och any detrimental weapon to attack the police. If they continue to take these dangerous action, the police will, under the condition of having no other choice, use the low level weapon including solid bullets to shoot back.

A Chinese journalist from mainland was beaten by rioters. Even though it was only one case of journalist being attacked to such a serious degree, it is still too serious and shouldn’t have happened.

Various photos show that many people were wounded. Long time struggle with the police, protesters couldn’t control their mentality. Their action not only blocked the traffic, but also was easy to cause injuries.

The event that took place in Hong Kong was a dreadful tragedy. Young people listened to the instigation of the bad people. They were not aware that they were wrong, even if they were, they would not correct. On the contrary, they walked on the wrong way even further. Time will tell they were wrong and they can only realise that later after some time.

Chinese government has always insisted on the One Country Two Systems. Whatever they do, they like to see the continuous prosperity and stability in Hong Kong. All those who could think will understand that the real democracy or freedom is not like this. The true democracy and freedom are established on the basis of peaceful environment, rational thinking, self discipline, compromise and responsibilities. Violent action can only cause injuries and that injury or hurt will stimulate hatred. This is not what people want.

For those who took extreme actions, they will be judged by the law and likely be punished according to law. Those who love peace hope to see Hong Kong continue to be prosperous and stable.