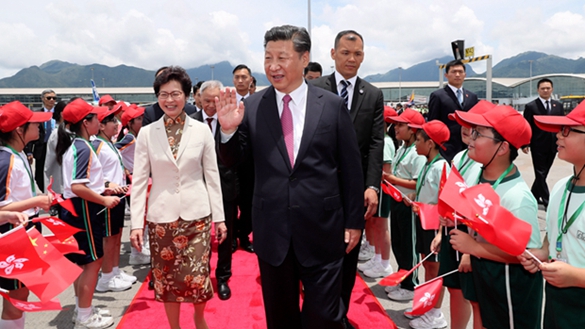 STOCKHOLM, Dec. 30(Chineseonline.se) — A grand ceremony on returning of Hong Kong to China was held at kl. 00:00, July 1st, 1997 marking an end of the British colonial rule of Hong Kong for over 150 years. It also marked the beginning of One Country, Two Systems in Hong Kong Special Administrative Region.

A grand reception was held to celebrate the returning of Hong Kong to the motherland, China.

A formal ceremony on the establishment of the Hong Kong SAR government was held and the governor was sworn in.

Tung Chee-hwa was sworn in as the first Hong Kong SAR governor .

Through more than a decade negotiations, China and Britain reached an agreement to return Hong Kong to China by June 30th, 1997. Hong Kong will implement One Country Two Systems which was designed by China. That means Hong Kong will be ruled by Hong Kong People and enjoys high level autonomy in principle. When Hong Kong was returned to China, Chinese people were very happy and proud.

Hong Kong became a front for China’s reform and opening up because the opening of Guangzhou and Shenzhen was actually directly to Hong Kong. The two places are so near to Hong Kong and the communication between the two sides had no hurdles. Hong Kong has kept its prosperity and stability.

Many people were aware that a large group of young cultural and art talents went to Hong Kong and made great contribution to Hong Kong’s cultural prosperity.