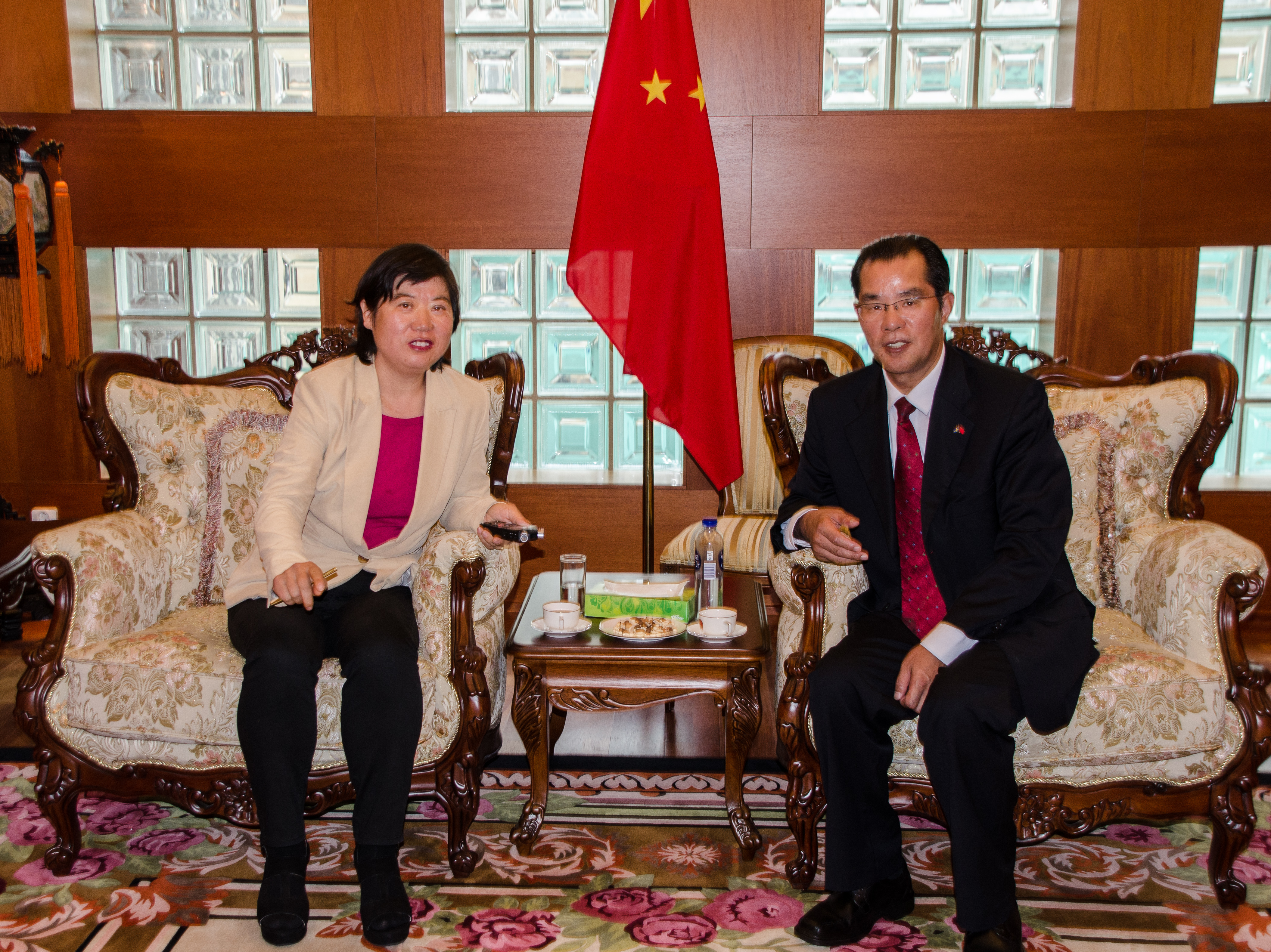 STOCKHOLM, Aug.18(Greenpost)– Chinese Ambassador to Sweden Gui Congyou has accepted a written interview with the Chinese-English language media in Sweden Green Post or greenpost.se upon his one year anniversary of working in Sweden. The following is the full text of the interview. 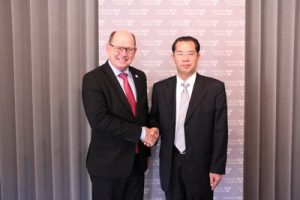 Q: Dear Mr. Ambassador Gui Congyou, August 18 is the first anniversary of your work in Sweden. Over the past year, it is well-known that you have paid a visit to the Swedish king, met the parliament speaker and many Swedish government officials, you even went to the Swedish countryside and farms, from south to north, from east to west, you have visited many places and visited many people. In summary, what is your impression of Sweden?

Ambassador Gui: Sweden has beautiful environment, developed economy and Swedish people are highly educated. Sweden is a world leader especially in the field of technological innovation and green development. The Swedish people are very friendly and they are friendly to China too. This has impressed me very much. Sweden’s development achievements are driven by innovation, green and sustainable development, and open to competition. In the process of economic globalisation, the spirit of innovation and openness has enabled Sweden to absorb enormous energy and play a key role in promoting national economic and social development.
The current international situation is undergoing a complex evolution, and economic globalization is advancing in twists and turns. Sweden, like many countries, faces some challenges including helping immigrants integrate into society, responding to terrorist threats and combating organized crime. I believe that the Swedish government and people have the wisdom and ability to solve these problems and achieve better economic and social development. 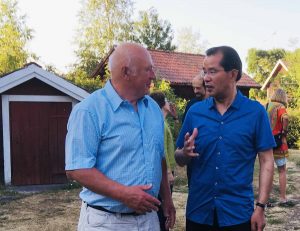 Ambassador Gui: Since the establishment of diplomatic ties 68 years ago, Sino-Swedish relations have developed smoothly and achieved a series of results. In recent years, there have been frequent exchanges at various levels and in various fields between the two countries, and pragmatic cooperation in areas such as technological innovation, energy conservation and environmental protection, clean energy, smart cities, food safety, and life sciences has continued to deepen.

In 2017, Sino-Swedish trade increased by 35% to a record high of 15 billion US dollars; the cultural exchanges between the two countries have become increasingly close, and the total number of Chinese students in Sweden has exceeded 8,000. The majority of the Swedish people are friendly to China, and the government and business community are hoping to expand cooperation with China.

At today’s new starting point, the two countries have greater potential for cooperation. The development concepts of China and Sweden are compatible. It was in Sweden that the concept of sustainable development was proposed to the world in 1972, and is a world leading player in the fields of innovation, green development and environmental protection. China is also vigorously practicing innovation, coordination, green, openness, and sharing new development concepts. Sweden is a world leader in innovation and sustainable development, and Sweden’s successful development experience contributes to China’s high quality development. China and Sweden have identical positions in supporting free trade, opposing protectionism, and tackling climate change.

Both China and Sweden love peace and resolutely oppose war and the use of force or threat to use force in international relations. Both have made important contributions to the international peacekeeping cause. We can also carry out in-depth cooperation in safeguarding world peace and promoting political solutions to hot issues in international arena.
Overall, I believe China and Sweden have a good foundation and broad prospect for further cooperation. The expansion of cooperation between the two countries can fully achieve the effect of “1+1>2”. 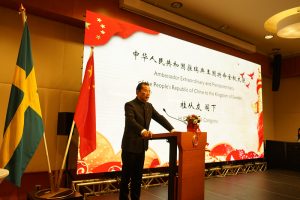 Ambassador Gui: In the next two years, we shall usher the 70th anniversary of the founding of the People’s Republic of China and the 70th anniversary of the establishment of diplomatic relations between China and Sweden. This will bring new historic opportunities for Sino-Swedish friendly exchanges and cooperation. We look forward to working with our Swedish friends to consolidate the traditional friendship between the two countries through a series of celebrations, actively promote dialogue and exchanges between the two sides in various fields, and transform the potential of cooperation into real new achievements based on the existing cooperation results. It will benefit the people of both countries and promote the common development and prosperity of the two countries. In the past year, I have had extensive contacts with friends from all walks of life in Sweden and found that they all want to know about China. But after all, the two countries are far away from each other and exchanges are not enough. Some Swedish friends and media people still don’t know much about China, and have never been to China. Very few Swedish media have also pointed out their opinions on China, and even looked at China now with their preoccupied view point formed 40 or 50 years ago. My task is to introduce an objective, true and comprehensive Sweden to the Chinese people, introduce an objective, true and comprehensive China to the Swedish people, promote friendly exchanges and cooperation between our two countries, and build friendly exchange and cooperation bridges between the two peoples. My colleagues and I did exactly that and achieved good results. We hope that with the 70th National Day and the 70th anniversary of the establishment of diplomatic relations between China and Sweden, more Swedish friends are welcome to visit China, especially to expand the exchanges between the two sides, and to enhance mutual understanding, friendship and trust. Promote further development of China-Sweden relations and cooperation in various fields to create a positive and favorable atmosphere. 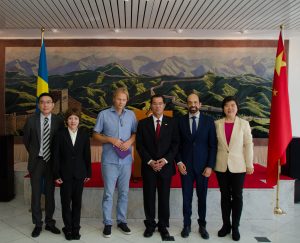 The “Belt and Road” is not far from northern Europe. As early as 1739, Sweden’s famous “Götheborg” voyage to China, opening the voyage between China and Sweden and the Nordic Maritime Silk Road. In November last year, the first Sino-European train between Nordic region of Kovala, Finland, and Xi’an began operation to connect the Nordic and Asian continents.
As the first Western country to establish diplomatic relations with China and the largest economy in Northern Europe, Sweden has unique advantages and broad prospects for participating in the “Belt and Road”. Sweden has always supported free trade, advocated open development, and advocated green innovation, which is highly compatible with the concept of “Belt and Road”. Swedish companies are internationally leading in infrastructure, equipment manufacturing, smart cities and green transportation. It is hoped that the Swedish friends will seize the important opportunities brought about by China’s opening up to the outside world and use the “Belt and Road” as a platform to push the pragmatic cooperation between China and Sweden to a new level. 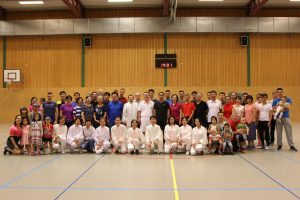 Ambassador Gui: Under the leadership of the Party Central Committee with Comrade Xi Jinping as the core, the Chinese people are united and actively strive for the Chinese dream of realizing the great rejuvenation of the Chinese nation. Overseas Chinese are an important force in achieving this great goal. Over the past year, I have worked with all the staff of the Embassy to resolutely implement the policies of the 19th National Congress of the Communist Party of China on overseas Chinese and Chinese living in Sweden, and implement the overseas Huiqiao project so that the motherland can develop and strengthen the dividends to benefit every overseas Chinese. For a long time, the overseas Chinese in Sweden have actively integrated into the local society and made important contributions to the economic and social development of Sweden. I would like to take this opportunity to extend my cordial greetings and best wishes to the overseas Chinese.

China’s development is at a new historical starting point. China is gradually approaching the center of the world stage, and is approaching the Chinese dream of realizing the great rejuvenation of the Chinese nation and has the unprecedented ability and confidence to achieve this goal. It is hoped that the overseas Chinese will continue to firmly support the great cause of the motherland’s reunification, maintaining social stability, firmly support the country’s strong development and China-Sweden friendly cooperation, and resolutely oppose any people engaged in anti-China separatist activities in any form or in any way to split our country and contribute to the Chinese dream of great rejuvenation of our nation.

Meanwhile, I hope that the overseas Chinese in Sweden will continue to actively participate in the economic and social development in Sweden and closely follow the steps of innovation and development, and better integrate personal development with Swedish development. It is also hoped that the overseas Chinese in Sweden will actively cooperate in the fields of Sino-Swedish innovation and environmental protection, put up forward your suggestions and proposals, and vigorously promote the non-governmental and cultural exchanges between the two countries, and make greater contributions to consolidating the social and public diplomacy of Sino-Swedish friendly relations and cooperation.

My colleagues and I are willing to continue to maintain close ties with the vast number of overseas Chinese and listen to their opinions and suggestions on how to further promote the development of China-Sweden friendly and cooperative relations.