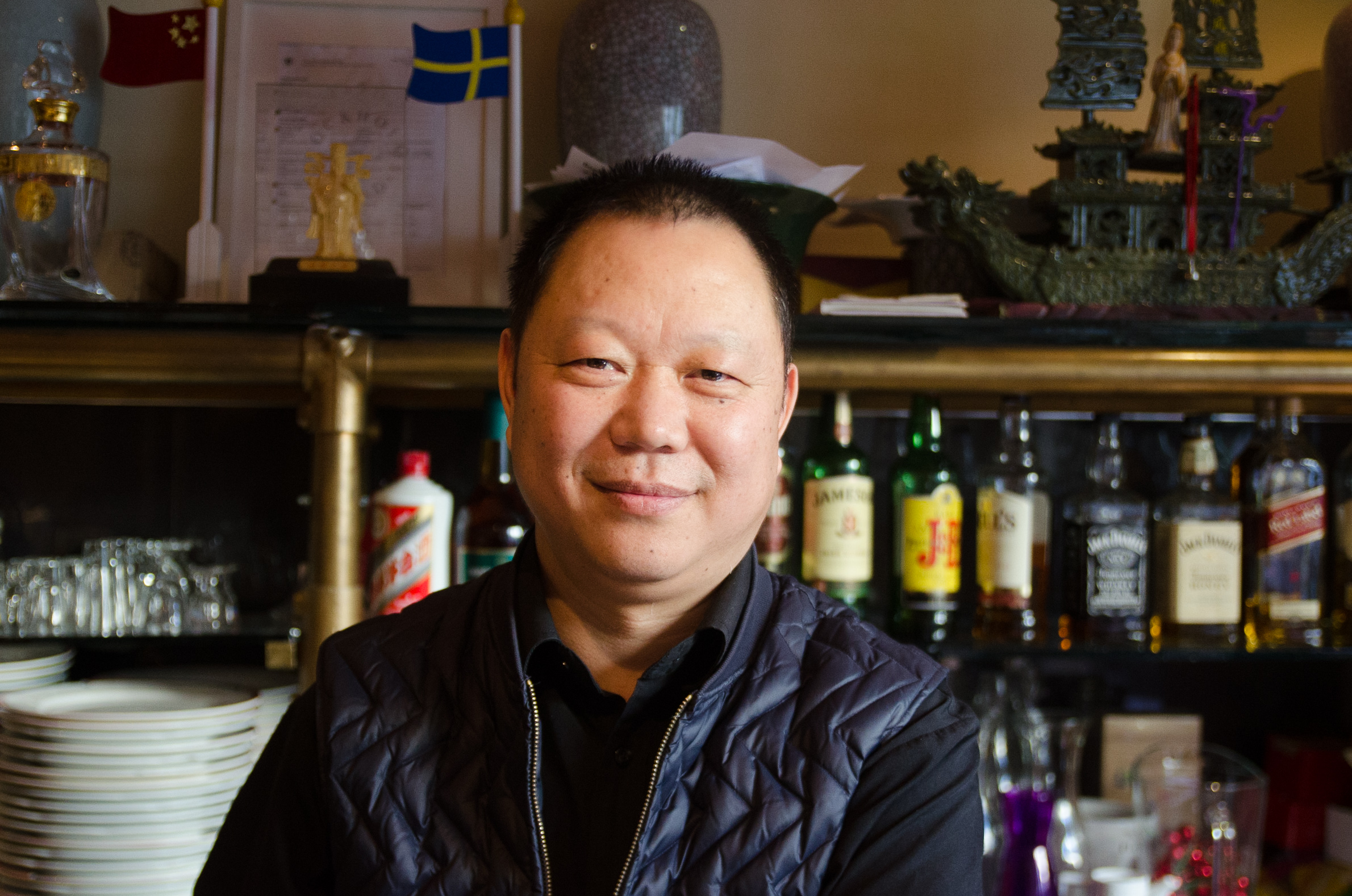 STOCKHOLM, Feb. 20(Greenpost) – Mandarin Paradis Restaurant sits nearby with a walk of less than 20 minutes. Due to my summer job as an interpretor, I sometimes went to Mandarin Paradis with my customers. It tastes good! Thus, I like to have a visit now. 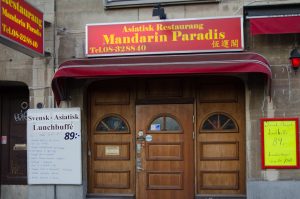 On a recent sunny day, I came over to Mandarin Paradis Restaurant. With the yellow words on red board, it was easy to recognize that it is a Chinese Restaurant. 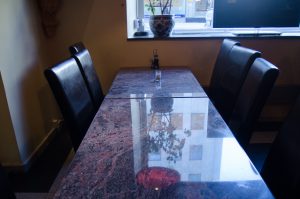 As we entered the room, one can easily see the clean marble table with the reflection of flowers and apartments from outside. 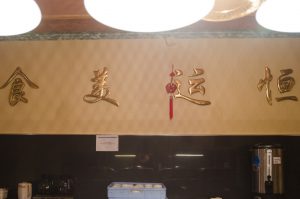 Heng Yun Mei Shi or Mandarin Paradis Chinese Cuisine made of golden coating is written on the wall with a small happiness tie hanging in the middle. 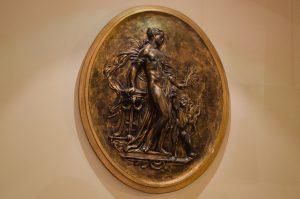 However, on the other side of the wall, there are western sculptures and art works coexisting. 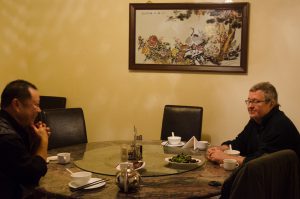 It is like on this table, a Chinese and a Swedish sit by the same table happily. 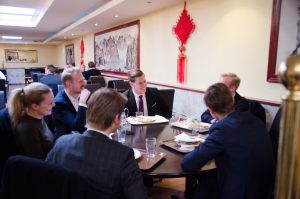 Mandarin Paradis is easy to recognize in this Swedish densely populated area. According to my understanding, Swedish city planning didn’t allow any restaurant to show more than the other but will all the businesses or restaurants compete fairly and have a harmonious city environment. However, something red and yellow is easily seen as a Chinese flavour. 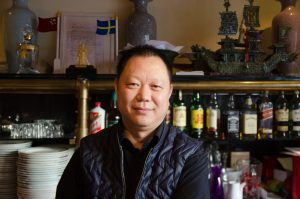 Zhou Minwei has lived in Sweden for 17 years and during this period of time he has opened three restaurants with one being managed by his wife and the other now by his sister. How can you keep your customers? In other words, what is your secret to make the best restaurant? 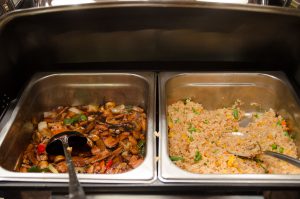 “Our goal is not to make the best restaurant, but we shall make our best to manage our restaurant. We don’t make advertisement, but put the money into providing the best food we can. 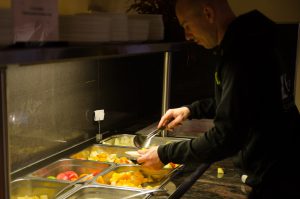 When the customer is satisfied, he will tell his friend and they will come here again. ” 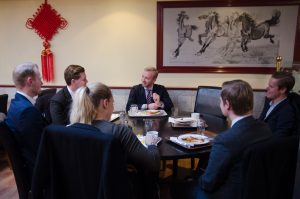 He said most customers are Swedish. Chinese customers only come in summer for a short period. 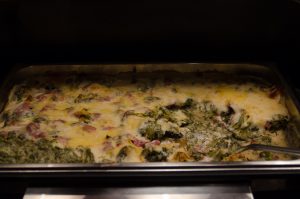 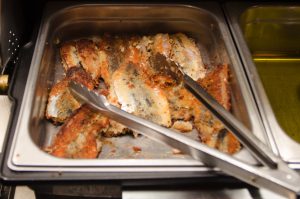 But in the evening, there will be typical Chinese food. People can order any dish they like, while for lunch it is buffet. 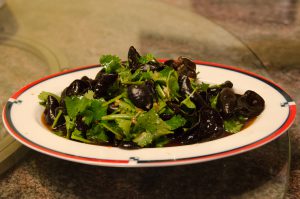 This is a good starter with black svamp and green saker. Black svamp is a good dish that cleans the intestent and stomach.

Zhou Weimin was born in Qingtian, Zhejiang Province, East China. He grew up in Hangzhou, capital of Zhejiang Province. After he graduated from college, he learnt to be a cook while working at normal time. He can cook Hangzhou cuisine which is famous in China. 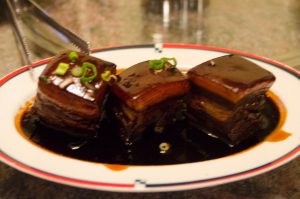 Dongpo Pork he cooked is an excellent dish. He often cuts it in an inch cubic form with meagre meat a little more than fatty meat. He imports these kind of pork from Germany. Swedish pork is a little bit fattier. He often stews the pork for four hours with small fire so that the fat is almost all coming out. Thus the pork he made is very delicious to taste and not of much fat. 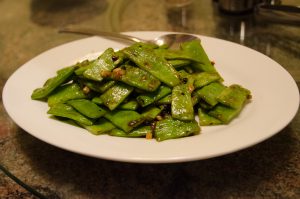 This is fried green beans which is neither too salty nor lack of salt, just lagom. 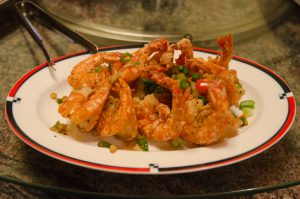 This is fried prawn which is very crispy and can be eaten with the shells. One can gain calcium from it. 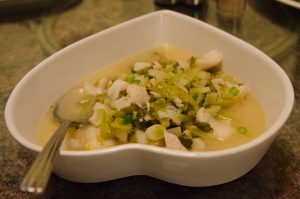 This is fish cooked with sour cabbage. This tastes a little different from the one cooked in northern China, it is Hangzhou taste, Sweet sour, lagom salt, lagom taste! 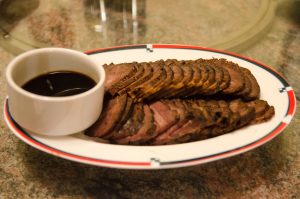 Biff stewed with all kinds of ingredients was cooled and then cut into pieces. Dim it with soy sauce, taste good but not fat.

These dishes look very much like typical home made dishes. When man taste them, they are typical Hangzhou cuisine. Without purposely appealing to Swedish taste, Zhou Minwei provides typical Chinese dishes. Swedish doesn’t need to fly to China to taste typical Chinese food, they can taste it here. 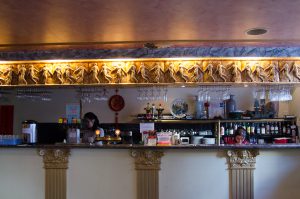 “I think the best is to be honest and down to earth. In fact, Swedish people are also very diligent and sometimes, I feel my neighbour works even harder and longer time than me. We provide good Chinese dishes to them so that they can taste them themselves, gradually, they will be interested in Chinese cuisine and culture. This is also a sense of relief for ourselves. No matter where we go, we keep our Chinese traditional cuisine and culture. Good traditions from our ancestor should not be forgotten. Otherwise, no matter how much money you earn, it will not be considered successful!” said Zhou Minwei. 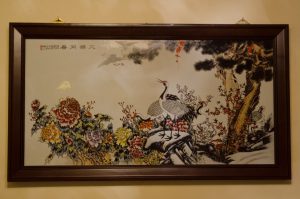 Of Course, we should adapt to Swedish culture and society too, Zhou said proudly. “I have a capable and kind hearted wife and a daughter and a son. I have always encouraged my children to study Swedish culture and melt in Swedish society. Meanwhile, they should not forget their homeland and have a Chinese heart. ” 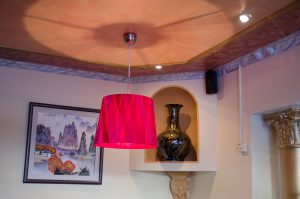 Born in the 1960 talet, Zhou felt he belonged to the lucky generation seeing opening up of China and the great changes taking place in China. China’s living standards are improving day by day. On the other hand, he said we also belong to the generation which is a little bit proud and satisfied with their life may be because our childhood was too poor but we had a lot of free playing time and space, thus, we feel happy as long as we made some progress. We are not too ambitious, we are used to simple life, we like to be with the nature and are willing to keep good Chinese tradition.